The Mysterious Death of Captain Salter 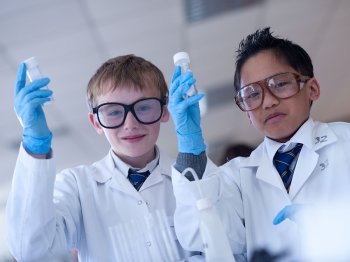 Christopher Bailie and Antonio Sinego of Christian Brothers School,
Belfast at the Salters' Festival at the University of Ulster, Coleraine

OVER 150 pupils from 29 schools from all over Ulster enjoyed a fun-packed day of chemistry at the 10th Salters' Festival of Chemistry, held at the University of Ulster’s Coleraine campus this week.

The Festival is the largest of its kind in the UK and is organised by the University’s Department of Access and Educational partnerships, and is held in association with the Salters' Institute and the Royal Society of Chemistry.

The Salters’ Company is one of the Great Twelve City of London Livery Companies and was founded in 1394 for the medieval trade in salt. The Salters' Institute, established in 1918, and now the Flagship Charity of the Salters' Company, aims to promote the appreciation of chemistry and related sciences among the young and to encourage careers in the teaching of chemistry and in the UK chemical and allied industries.

During the morning the teams took part in a competitive, hands-on, practical activity, “The Mysterious Death of Captain Salter” in which pupils used their analytical chemistry skills to identify the guilty party from evidence gathered at the scene of the ‘crime’.

In the afternoon, they competed in the “University Challenge”, and took part in a fun lecture delivered by bioscientist Professor Chris Shaw, in a talk entitled ‘Poisonous Animals that Can Kill’ and were able to see and handle a range of reptiles and spiders.

The day ended with a prizegiving at which all participants received individual prizes and participation certificates and the winning teams were awarded prizes for their schools.

Dr Damian O’Kane, Head of Access and Educational Partnerships at Ulster said: “This is the tenth and arguably the best ever Salters’ Festival of Chemistry.  It was a fun packed day with pupils getting the opportunity to experiment and investigate using chemical techniques.

"I believe that through activities like this we encourage young people to engage and stay involved in science subjects throughout their educational journey.  Clearly the development of highly qualified and skilled scientists is essential to the health and future growth of the Northern Ireland economy.”