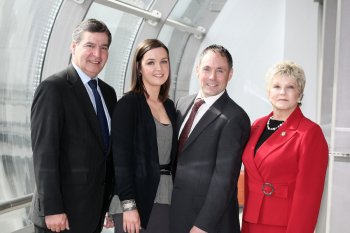 They are international scholarships of one year’s duration awarded annually to outstanding Ceramic and Celtic Studies students from the University of Ulster.

The awards were established to enhance students’ opportunities for personal as well as educational development.

Dr Linda Beard, Founder and Chair of the Richard Kennedy Degenhardt Belleek Collectors’ Scholarship Endowment Fund, presented the awards of £600 each to the winning students at a special ceremony at Ulster’s Belfast campus this week.

“No one could have imagined just a few years ago that our students could travel to such far flung places and do such groundbreaking work.  One of the scholars told me that winning this award had changed her entire life - Richard Degenhardt would have been thrilled with that accolade,” said Dr Beard.

“We have now presented these awards for the past nine years, with 21 recipients in total. This is a wonderful living memorial to my friend and unique individual, Richard Degenhardt.”

Claire Muckian, from Dundalk in County Louth, is a second year undergraduate student on the  BA Hons Fine and Applied Arts programme. She will use her award to undertake an Assistantship Programme at the International Ceramic Research Center in Guldagergaard, Denmark.

Aodh Mac GairbheÃ¡, from Rann na Feirste in County Donegal, is a final year undergraduate student on the  BA Hons Irish Language and Language Literature programme. He will use his award to present the findings of his undergraduate thesis on Nouns in Irish Describing People and their Characteristics, at a conference in Aberdeen.

Established in May 2001, the Richard Kennedy Degenhardt Belleek Collectors’ Scholarship Endowment Fund has provided 21 outstanding University of Ulster students with the opportunity to expand their knowledge and undertake research they would not otherwise have been able to carry out.

The scholarships are funded through the generosity of many individuals and groups, including Belleek collectors world-wide, international Belleek Chapters, special friends and family of Richard K. Degenhardt, the Belleek Pottery and the Belleek Collectors’ International Society.

The awards are named in memory of the late Richard Kennedy Degenhardt who was instrumental in establishing the Belleek Collectors’ International Society. The scholarships are a tribute to his definitive knowledge of Belleek Parian China, which remains renowned among collectors world-wide today.