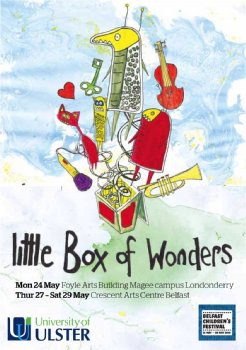 Students from the University of Ulster’s School of Creative Arts are set to give the first performance of a new theatre show they have created for young children.

The Little Box of Wonders is an originally devised performance for six to eight year olds, created by staff and students in Drama, Dance and Music at Magee. It will be presented as part of the Waterside Children’s Theatre Festival in Londonderry on the 24 May and the Belfast Children’s Festival from 27  to 29 May.

Dr Tom Maguire, Lecturer in Drama and show Director, said: “The show explores what happens when you start with an opened box and add theatre, movement, storytelling and song.  It was developed from initial workshops led by our own students with young pupils from Fountain Primary School and Model Primary School.

“The workshops encouraged the children to unleash their imagination and generated a wealth of creative material that was subsequently developed into a zany adventure narrative, featuring the exploits of a mischievous protagonist called Spag.

“We are delighted that the performances have been selected by the Waterside Children’s Theatre Festival and the Belfast Children’s Festival and we look forward to mingling with the international performers who feature in these festivals and sharing our adventure with young audiences in both Derry and Belfast.  It will also be a great experience for the young pupils from both primary schools to see how their creative ideas come to life on stage.”

These performances are supported by Ulster’s Access Agreement fund, which encourages and supports staff and students in developing meaningful links with schools and community groups.

The two performances in the Foyle Arts Building, Magee campus will take place at 11am and 7.30pm on Monday 24 May. Tickets prices start at £2, with discounts for group bookings. For further information and bookings please contact the Cultural Development Office on: 028  7137 5456 or culture@ulster.ac.uk

Performances as part of the Belfast Children’s Festival will take place in the Crescent Arts Centre from Thursday 24 May through to Saturday 29  May, including several matinees.  Further information can be found from www.belfastchildrensfestival.com.