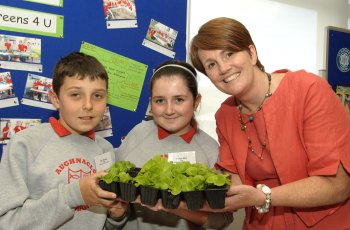 Education Minister Caitriona Ruane, representatives from the Department of Education and the Joint Business Council, representing employers’ organisations on both sides of the border were among the special guests at the event.

Since last September, hundreds of pupils from five primary and five post-primary schools in Northern Ireland have worked in close collaboration with ten partner schools across the border as part of the successful Dissolving Boundaries programme.

It has been spearheaded by the School of Education at the University of Ulster and the National University of Ireland, Maynooth, to facilitate cross-cultural educational linkages between the participating schools .

Now in its tenth year, the current phase of Dissolving Boundaries – jointly funded by the Departments of Education in Belfast and Dublin – used ICT to encourage enterprise and create mutual understanding through collaborative curricular work using both virtual and real contact between the pupils north and south of the border.

For the past eight months, the pupils have been using ICT to research and develop their business ideas and get a good understanding of what makes a successful entrepreneur. Some schools even took the project step further and produced goods for sale on both sides of the border.

Pupils from primary and post-primary schools on both sides of the borders showcased their entrepreneurial skills today during a unique cross border event at the University of Ulster’s Jordanstown campus.


Speaking at the event the Minister said: “I am always very keen to develop and support opportunities for our pupils and teachers to engage across both the education systems on the island. The Dissolving Boundaries programme does just that, making use of the latest communications methods to help young people work together right across Ireland.

By focussing on enterprise in their projects, the participants are gaining an excellent insight into the world of business and developing valuable skills for later life.

“I commend the University of Ulster and National University of Ireland who, with the support of IBEC and the CBI, have worked hard to deliver the programme.”

The pupils worked on a wide range of business ideas from cashing in on the commercial opportunities created by St Valentine’s Day to creating scary story books and personalised t-shirts. The partner schools kept in touch throughout the year by giving regular progress updates via video link.

One of the teachers involved, Suzette Butler from Monkstown Community College said: “We were paired up with the very talented budding filmmaker, David Walsh from Ratoath School in County Meath and his wonderful class. I have to say that the film-making has really added a new dimension to a very real cross-border mini enterprise. My own pupils are so motivated – not only making money, but by making films. This is a super way to encourage pupil learning and put them literally at the centre of it.”

RMC Designs was the ‘company’ set up by both schools to produce Valentine and Easter Cards.  Each school designed several cards.  Online blogs and forums were used by pupils to update each other on progress.  Some pupils looked for ideas on the internet and others drew their own designs.  They also used the internet to find suitable verses for inclusion on the cards. Cards were scanned on to computer.  All these were displayed on the online Photo Gallery.  Cards were printed in both schools and then each school sent their cards to be sold at the other school. The process was filmed by Ratoath using the Flip camera and edited using the Mac Notebook.

Bill O’Donnell – a teacher at Holy Family Primary School in Londonderry –highlighted the key role played by technology and the visiting entrepreneurs:

“The students used video conferencing and online forums most of the time to discuss the lessons they had been taught by their respective Young Enterprise tutors and also to communicate progress on their card making. The video conferencing was very useful for showing their products.

Paula O’Dwyer from the Joint Business Council said: “Technology is a crucial component of teaching and learning for the 21st century and ICT is an enabler for economic growth, development and competitiveness. Collaboration at this level will give students a better understanding of the opportunities that exist on both sides of the border to live, work and study. A vibrant all-island economy will be built on a culture of collaboration, creativity, entrepreneurship and innovation.”

According to Dr Roger Austin, University of Ulster academic and co-director of the Dissolving Boundaries programme, , this is the first time that ICT has been used in this way for in a cross border collaborative project to promote enterprise between schools  with pupils working in joint cross-border teams.

He said he was impressed by the business flair and application of ICT shown by the pupils.

“Children have a great aptitude for technology and a nose for business. They are quick to learn, they show remarkable enterprise skills, and developed a wide range of new and transferable skills. These skills will be essential in order to survive in the competitive business environment and are exactly in line with the European Commission’s Trade and Enterprise body’s recommendation that we need young people with experience of working in multi-national teams, using technology to solve problems.

“I think it’s safe to say that we can all learn from the drive, determination and energy shown by the young people who took part in the programme. Next year, with the support of the Joint Business Council and the Departments of Education on both sides of the border, we hope to build on the success of this year’s programme." 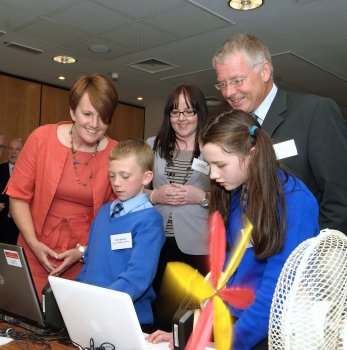