Businesses Urged To 'Raise Your Game' 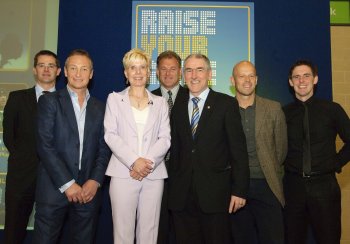 Business leaders have gathered at the University of Ulster’s Jordanstown campus for a conference highlighting the links between sport and business.

The Ulster Sports Academy and Ulster Business School teamed up with Belfast-based management development and events company Podiem for the one-day ‘Raise Your Game: Management & Leadership Lessons from Sport’ conference that featured a impressive line-up.

The sporting greats told business leaders and managers from across Northern Ireland of their experience of the sporting and business worlds and how the two go hand-in-hand.

With the 2012 London Olympics fast approaching and England bidding to host the 2018 World Cup, Jonathan Gregory said that possibilities are there for Northern Ireland to benefit.

He said: “It is a small world and it is just across the water. I think that anyone involved in sport and business will benefit from the Olympics in London, or from a World Cup in England - the ripple effect that people talk about is absolutely true. Access and transport these days make the world smaller so I think it is accessible for businesses and for fans to come over and watch it.

“I know a lot of people leave Belfast on a Saturday morning to go to Old Trafford and Anfield and so on, so why wouldn’t you travel for the World Cup for example?”

The University of Ulster’s Jordanstown campus is already a designated pre-Olympic and Paralympic training camp for the 2012 Games and Gregory said that there are huge possibilities for the local economy to benefit.

He said: “For me sport and commerce are intrinsically linked. I don’t think the two could ever be isolated. No matter what business you are, there are commercial benefits of working in sport.”

Tyrone coach Mickey Harte said: “In the sport and in the business world we are working with people and want people to deliver the best of themselves. I think that the principals that apply in sport transfer very well to the business world.

“Events like this are enlightening. A lot of people think that sport is just to be played and there isn’t much of a connection between it and business. There are connections that we might not necessarily be made aware of unless we get up here and say what sport is about and you can see how this works in business as well.”

Harte also praised Ulster’s development in sport as it strives to become the leading University for sport on the island of Ireland.

He said: “This University has been at the forefront of the advancement of sport. The facilities are here that aren’t in other places as well as the expertise. We as a team have been working with William Moore (Performance Services Officer) for the past number of years and we find it a great benefit. He’s great to work with, he’s on top of his game and has great expertise there.”

Dr Nigel Dobson, co-director of the Ulster Sports Academy, said: “We are delighted to announce that the next conference in this series on 24 June will feature five times Olympic gold medallist Sir Steve Redgrave, another hero who can offer a valuable insight into the world of sport.

“The purpose of the Raise Your Game series mirrors our key focuses with our athletes at the Academy to develop leadership, management and teamwork skills in order to success and come out on top.

“We are constantly establishing links in the business community and have been developing management and leadership in sport through the MSc in Sports Management with the Ulster Business School.”

Kevin Kelly, Director at Podiem, said: “The inaugural Raise Your Game conference has been a huge success. We had over 170 business leaders in attendance and the feedback has been sensational. There is a real appetite to learn from sport and we look forward to continuing Podiem's partnership with the Ulster Sports Academy and Ulster Business School.” 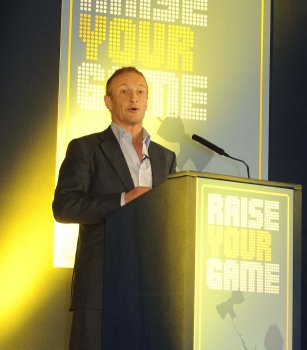