The Mayor of Derry Cllr Paul Fleming, has welcomed the 13 soccer teams competing in this year’s Collingwood Cup at a special reception at the Guildhall.

This year’s blue ribbon event of university soccer is being hosted at the University of Ulster’s Magee campus, for the first time in the city’s history.

Managers and captains from each team joined the Mayor, representatives from the University of Ulster, the Football Association of Ireland and the Irish Football Association, as well as Derry City manager Stephen Kenny and Terry McAuley Chairman of the Irish Universities Football Union, for the official welcome to the city, on the first day of competition.

Professor Deirdre Heenan, Dean of Academic Development and Acting Provost at the Magee campus, said: “It is a great honour for the Magee campus to be hosting the Collingwood Cup. I would like to commend the work of Martin McCann and his team for bringing the tournament here. We are all looking forward to University of Ulster teams doing well in the competition and hopefully picking up some silverware.”

“The tournament is not only great news for the University but for the entire city, where it will bring many benefits. As well as promoting sport in the community, it will undoubtedly benefit the local economy, with so many from across the country coming to our city. The opportunity for Magee to host the tournament is a unique occasion for the people of the city to enjoy some of the most exciting young football talent on show.”

On the announcement in January of the competition coming to the city, the Magee campus received backing from two of the host city’s footballing sons, Paddy McCourt and Darron Gibson.

Manchester United player Gibson, said: “The announcement of the competition coming to Magee is great news for the sport in Derry. I grew up playing at the University of Ulster pitches at Duncreggan and it is a great honour for the Collingwood Cup to come to the city for the first time. Hopefully we can make the most of the home advantage and also make it another historic occasion with Magee lifting the trophy for the first time in the campuses history.”

Celtic’s Paddy McCourt, who spent three years with Derry City FC before his 2008 move to the Scottish giants, said: “The Collingwood Cup is a real landmark event for the city. Bringing universities from all over the country to the Magee campus will highlight the great footballing tradition in Derry and will give the people of the city the chance to see some of the country’s best footballers right on their doorstep.” 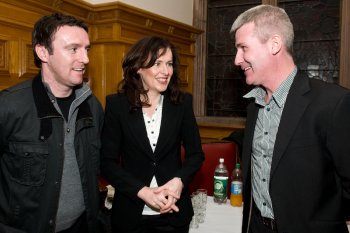