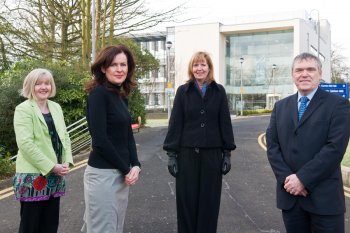 Today’s college teenagers are ideally placed to reap the benefits of the planned transformation of the Magee campus, Professor Deirdre Heenan of the University of Ulster has told an influential group of school principals.

The Foyle Learning Community, which comprises all post-primary schools in the Derry City Council area, two special schools and the NWRC, held its monthly meeting at Magee for the first time.

The FLC aims to promote a culture of collaboration between post primary educational providers in the city council that will ensure all pupils have access to a wide range of vocational and academic subjects in their local community.

University officials said the invitation was a recognition of the FLC’s leading role as a stakeholder in the future of university education and reflected Ulster's determination to build on successful schemes that have aided pupils’ studies, boosted their self-belief and opened a door to higher education.

Professor Heenan, who is Dean of Academic Development at Magee, said the meeting last week was an opportunity to brief leaders at the teaching coal-face about the University’s expansion plans and to reach out to their students with a growing menu of degree and professional courses at Magee.  “The bonds of learning between Magee and its hinterland schools are growing ever stronger,” she said.

FLC chairman, Mr David Funston, who is Principal of Lisneal College, said:  “I believe that, in the interests of all the young people of this area the schools should have a close and meaningful relationship with our local university, and so I greatly welcome the opportunity for members of FLC to meet with Professor Heenan today and to discuss plans for the future”.

Professor Heenan’s primary role is to drive Magee’s expansion and make reality of the vision of a vibrant University quarter and a ‘knowledge city’.  She told the principals and deputies that availability of Foyle and Londonderry College lands at Northland Road when the college transfers to Clooney will enable the University to consolidate a knowledge corridor at the heart of the city, which ILEX has identified as a must for the city’s growth.

“The College’s migration to Clooney will free up 30 acres of land which the University intends to develop as the centrepiece of expansion at Magee.  Our eyes are set on achievable targets – doubling the physical size of Magee, creating two new research institutes, rapid growth in student numbers and innovative new degree and study courses. In short, a flagship educational campus that will also further strengthen Magee’s input to the regeneration that this city so richly deserves.

“The Class of 2010 in post-primary schools are in pole position to benefit from a bigger Magee. It is the only University of Ulster campus where the student population is set to grow over the next five years.

“The University has an application in with the Government, asking for permission for Magee to take on another 1,000 full-time students. That call is supported by all the political parties in the North-West and it is crucially important that all interests in the region speak with one voice for Magee’s expansion.”