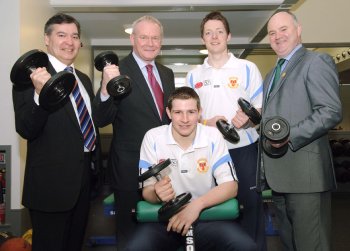 The Academy is an innovative programme designed to develop and promote Gaelic games at every stage of the sports, from community to elite level, and will be based at the multi-million pound state-of-the-art sports centre facilities at the Jordanstown campus.

The Minister said: “This Academy will provide the most advanced facilities not just for the cream of GAA talent. It will also promote the sport at all levels through coaching for local schools, both on and off campus.

“The University of Ulster has a long history of sporting achievement, with many past talented members of Jordanstown’s Gaelic Clubs playing at senior levels for their county, including the likes of present students Raymond Mulgrew and Colm Cavanagh who won All-Ireland senior titles with Tyrone.

“It is a state-of-the-art facility which can only serve to enhance the University’s reputation for sporting excellence and, at the same time, nurture the sporting talent of the future.”

The University of Ulster initiative is supported by Sisk - one of Ireland’s leading construction companies which redeveloped the home of the GAA Croke Park, as well as building the new Aviva stadium in Dublin.

John Farrell, President of Ulster’s Jordanstown Gaelic Club, said: “It is a great honour to have the Deputy First Minister here to help launch this academy. Gaelic games is at the heart of this University. Every week across all the campuses there are up to 20 Gaelic teams playing at the University of Ulster which shows the extent that the students will benefit from this academy and the partnership with John Sisk & Sons, who we are very happy to be working alongside.”

Ulster’s academy will be dedicated to developing the high-calibre of sports stars that already play for teams at the University. However, while advancing the elite of the game, the academy, through a special outreach programme, will bring Gaelic sports to schools and young people throughout the country.

The University of Ulster continues in its endeavour to become the leading university for sport on the island of Ireland.