Collingwood Cup A Success For Derry 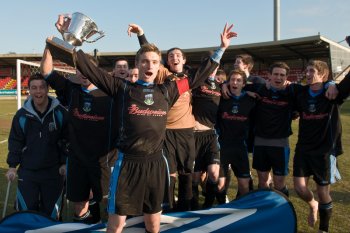 The Collingwood Cup drew to a close on Thursday, with the competition being hailed as a great success for organisers - the University of Ulster’s Magee campus.

UCD won the competition, beating NUI Galway 4-3 in a penalty shootout at the Brandywell Stadium in Derry.

One of the organisers and team manager for Magee football club, Martin McCann, said: “I think the tournament went brilliantly. It couldn’t have been any better. It  brought a lot to the city of Derry, not just in a football capacity but it has also benefited the local economy and promoted sport in the community.

“I would like to thank my organising team of Andrew Humphries and Paul Quigley for the work they have done making this competition a success for the people of the University and the people of Derry.

“Some great football has been played this week, which shows the high calibre of sport that there is in universities across the country. The weather has been great and a lot of supporters have turned out to get behind their teams and I’d like to thank them for that as well.”

University of Ulster sides performed well in the competition with hosts Magee and the Jordanstown teams making it through to the semi-finals of the competition.

Terry McAuley, Chairman of the Irish Universities Football Union, said: “The competition was absolutely excellent. The fact that teams from all over the country, from Cork, Dublin, Galway all travelled to Derry, some for the first time ever, was fantastic.

“It is the first time that the Collingwood Cup has been held in Derry and I certainly hope it will return there again, or even host one of the other tournaments like the Harding Cup for freshers and let them see the city.

“Each of the teams and officials have commented on the great organisation, the quality of the pitches and the hospitality and friendliness of the people and I must commend the work between the University of Ulster and Derry City Council in pulling it all together. We were blessed with the good weather which helped as well.”