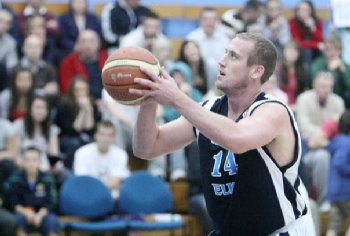 University of Ulster international sports scholar Dave Neal has picked up the Irish Superleague basketball’s Player of the Month award.

American Neal picked up the accolade after helping the Ulster Elks side to wins against UL Eagles, Shamrock Hoops and Neptune in the month of February.

A former University of Maryland student, Neal is completing his MSc in Sport Management degree at Ulster’s Jordanstown campus.

The award follows in a tradition of Ulster’s international scholars winning the award, as last season Neal’s fellow countryman Matt Betley picked up the accolade for his performances.

Ulster Elks Head Coach Dr Deirdre Brennan said: “This is a great achievement by Dave and the second year in a row that an international basketball scholar has achieved a national award. He has really found his form in the second half of the season and has demonstrated the qualities that saw him lead his alma mater University of Maryland to the last 16 in the nation last year.”

His exploits last month saw him average 27 points per game, as well as 14.6 rebounds and 3.8 assists, a record well deserving of the player of the month award.