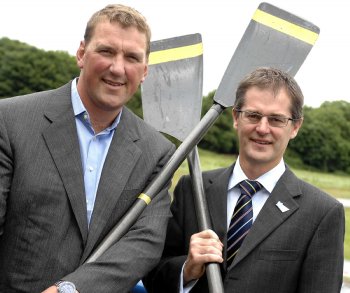 Four-times Olympic gold medal winner Sir Matthew Pinsent has said that the University of Ulster ‘Sport Comes 2 Town’ festival is the best community sports initiative that he has ever seen.

The former rower was speaking on Wednesday afternoon on the second day of the Ulster Sports Academy’s extravaganza in Portadown, which reaches its finale this Saturday 26 June.

Sir Matthew praised the University of Ulster’s four-day sporting festival which aims to encourage families to get active and get involved in sport.

The Olympian also said that getting children involved in sport was very important for their personal development and had words of inspiration for future sports stars: “Find something that you are good at and enjoy and willing to put the time in. In the beginning you need to look at getting young people involved in a variety of sports and then from there let them choose whichever sporting path they enjoy most and are good at.”

The pioneering University of Ulster ‘Sport Comes 2 Town’ has also been granted the Inspire Mark, the badge of the London 2012 Inspire Programme.

The London 2012 Inspire programme recognises innovative and exceptional projects that are directly inspired by the 2012 Olympic and Paralympic Games.

On Wednesday evening’s reception for the festival, Sir Matthew joined the Sports Minister Nelson McCausland who commended the University of Ulster for developing the concept for ‘Sport Comes 2 Town’.

The Minister said: “This is a festival of sport, culture, art, education and business, which is embedded in the local community, but takes its inspiration from the 2012 Games – the biggest sporting event in the world. Congratulations to the University of Ulster and to all the organisations – both public, private and third sector – who have worked in partnership with them to deliver this festival and to support local sport.

On the award of the Inspire Mark, the Minister said: “This is the first time in Olympic and Paralympic history that non-commercial projects and events can be officially recognised as being part of the Games. Through the Inspire Programme in Northern Ireland, we are using the Games as a catalyst to inspire change – at individual, community, regional and national level – which will ultimately leave a positive legacy.”

Tomorrow [Friday 25 June] will see another Olympic hero, Dame Mary Peters, in Portadown as she encourages women to take part in sport with the 5k Fun Run and Walk with proceeds from the race going to Marie Curie Cancer Care. Dame Mary will also take part with some of her sporting friends in a ‘Question of Sport’ at the Seagoe Hotel.

Friday morning will also see the International Conference on Sport and Good Relations at the Civic Centre, with experts examining the big issues of sport and social inclusion.

Further info on all the events at Sport Comes 2 Town can be found at www.sportsulster.com.