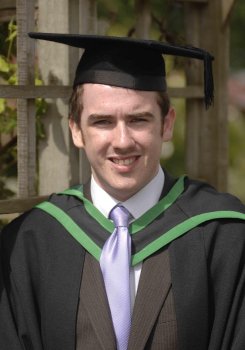 An industrial placement can be a stepping stone to employment, according to University of Ulster graduate David Gibson from Ballynahinch, County Down.

David, who receives a first class honours degree in Computing at today’s graduation ceremony at the Coleraine campus, spent his placement year with Microsoft in Dublin.

While on placement David got to work on a number of ‘real’ projects. He said: “It was an amazing experience to be working with software engineers from around the world who were involved in the development of new software prior to its worldwide release. It was very beneficial. I would certainly advise students who have an option of doing a placement year, to take up the option as they’ll get invaluable industrial experience.”

Following his placement with Microsoft, David won top prize in the Faculty of Computing and Engineering’s Innovation in Placement Awards last June. He was subsequently appointed by Microsoft as ‘Student Partner’ for the Coleraine campus for 2009 -10 to provide support for the university’s three teams competing in the Imagine Cup. Two of the teams he helped mentor reached the final and one of them went on to win third prize.

The Imagine Cup is a global software design and development competition that aims to encourage students to apply their imagination, passion and creativity to create high-tech innovative solutions that can make a difference in the world today.  David was a member of the University of Ulster team that was runner up in the Imagine Cup in 2007.

David is the son of Ann Marie and Gerry Gibson. He has secured employment with Liberty IT in Belfast and starts work with the company as an Associate Software Engineer in July 2010.