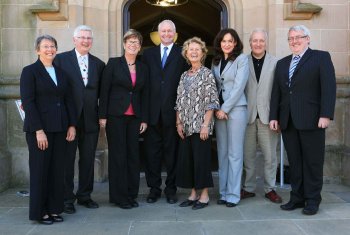 A drive to heighten the profile of University of Ulster Magee in America has been boosted by a prestigious link with the Fulbright Commission, the USA's premier scholarship institution.

The campus is to get a Fulbright Distinguished Chair, a professorial role that is highly prized by universities worldwide and one that takes it into an exclusive academic circle.

The University of Ulster is one of just four in the United Kingdom to be awarded a Fulbright Distinguished Chair, which is in American Studies.

Acting Provost Professor Deirdre Heenan said: “Ulster is designating Magee as an international hub for students from North America and we are keen to build upon our existing connections and forge fresh links with leading universities and graduate schools.

The University is to centre its American Studies programme at Magee and plans new courses which will be also targeted at potential students across the Atlantic.

Professor PÃ³l Ã“ Dochartaigh, Dean of the Faculty of Arts, described the Fulbright award as “a quality mark of international regard” for the University’s promotion of the Humanities.

He said: “The University has decided that the Fulbright Distinguished Chair, which will be instituted in 2011, will be located at Magee. Each year it will be occupied by a distinguished US citizen who will make a vibrant contribution to the University’s teaching and research at Magee, and to the life of the wider community in Derry. The appointment will span the University teaching year for a period of six months beginning September 2011 to March 2012, renewable for three years in the first instance.”

Professor Ã“ Dochartaigh, who is Professor of German and an internationally renowned German Studies expert, was elected a Member of the Royal Irish Academy, Ireland’s leading learned society, last week.

Two new courses being planned for Magee will have transatlantic interest.  Magee will be anchor for an online Masters in Irish and Scottish Studies in collaboration with the Universities of Strathclyde, Guelph and St Thomas, New Brunswick, Canada. A new Diploma in Irish Cultural Studies will be aimed at exchange students and the wider public.

Professor Heenan, who is also Dean of Academic Development at Magee, said the Fulbright link would add a new dimension to the campus’s international stature. “It will signpost Magee as an innovative and progressive seat of learning to third level institutions in the USA and Canada that operate progressive student exchange programmes.”

She told the Westfield State delegation: “This campus is at the heart of a city that is rich in heritage and innovation and we are hoping that more US and Canadian students will spend semesters here, to experience our teaching and lifestyle and make a distinctive contribution to our growth.”

The Westfield State group toured the campus and later were accompanied on a walk along Derry’s Walls by Nobel Laureate, Professor John Hume.

Westfield State is 90 minutes from Boston and enrols over 5,500 students. Its international initiatives have surged in the past few years under the leadership of its President, Evan Dobelle, who is a former Chief of Protocol at the White House.

Dr Robert Hayes, Vice President, Academic Affairs, Westfield State, said: “Ireland has always been a premier destination for students and faculty at Westfield State, chosen for the quality of study and its obvious beauty. We look forward to this regular exchange with Ulster.”

Professor Heenan told him: “We are delighted to host this visit from Westfield State College and look forward to further developing our links. I would also like to acknowledge the role that Massachusetts Congressman Richie Neal has played in bringing our two institutions together."

Later this month Therese Murray, President of the Massachusetts State Senate, will visit the Intelligent Systems Research Centre, the Magee-based flagship  institute which is involved in leading edge research in robotic science and other aspects of ‘artificial intelligence’.