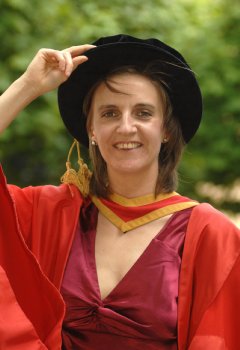 Susanne Stich graduates with a PhD from the University of Ulster today but the German-born student has already been achieving international success with her doctoral work.

Susanne’s first short film entitled Lily’s Image, which she has written, directed and produced herself as part of her PhD, has been screened at film festivals world-wide including the San Francisco Frameline, the Montecatini 60th Mostra Internazionale Del Cortometraggio, Italy and the Galway Film Fleadh.

It was also short-listed for the Irish Council for Civil Liberties Human Rights Film Awards in Dublin earlier this month.

The short drama focuses on eight-year old Lily following the separation of her parents and the subsequent new relationship of her father with a same sex partner.

“Lily’s Image is about children’s tolerance and – provided that it is given a space - the powerful creativity which can unfold from it,“ explains Susanne.

“As the story develops, Lily discovers her own personal reading of the situation, creating her own piece of art. In the process of doing so, not only does she move away from the traditional image of the family, she also discovers the power of her imagination and how it is linked to the reality around her in strange and complex ways.”

“The theme of a parent leaving and starting a relationship with a same sex partner hasn’t been looked at in too many films or stories. It is a particularly important story within the Northern Irish context, where the amount of homophobic incidents is still considerable,” added Susanne.

Susanne’s research, based in the School of Art and Design, also incorporated two other short films as well as her theroretical thesis. Overall, the project looks into the ‘Visibilities of Childhood in Moving Image Emphasizing Children’s Agency and Child-Adult Connectedness’, drawing on recent perspectives from sociology, psychoanalysis, visual anthropology and cultural geography.