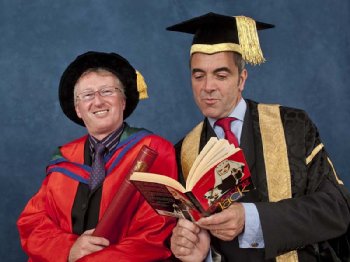 COLIN Bateman, a native of Bangor, Co Down and a successful author and writer for film and television has received the degree of Doctor of Letters (DLitt) for services to literature.

A winner of the Betty Trask Award, Bateman has maintained a consistently high quality output since his publishing Divorcing Jack debut that featured chief character journalist ‘Dan Starkey’ who has appeared in several of his later books.

Mr Bateman has written more than 14 novels, several children's books and numerous films and television series, including creating and writing the popular Murphy's Law (BBC), which starred James Nesbitt, the new Chancellor of the University of Ulster.