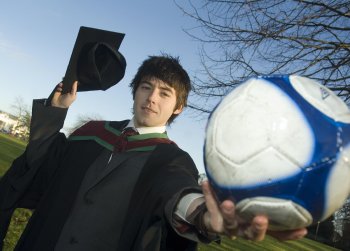 Being coach at a Manchester United Soccer School was one of the best experiences of Ciaran Collins’ life, but it’s not often you hear something like that from a lifelong Liverpool FC fan.

Ciaran from Omagh, Co Tyrone, graduates today with a Masters degree in Sports Management and says that a combination of the theory taught through the degree course and the extra-curricular sports coaching has helped him in his career.

“It was one of the best experiences that I could have hoped for. Working for Manchester United Soccer Schools was just brilliant, there is a lot to learn from some top quality experienced coaches and a lot to learn on the job as well,” said Ciaran.

“The organizational aspects of the Masters in terms of setting in place structures for programmes, how to gain funding for sports projects and development of sports management has been pivotal in the new initiatives and projects in my current job.”

The 22-year-old works as an Active Community Coach in Strabane District Council and said that he would highly recommend taking part in the Soccer Schools course.

A former Sports Studies student, Ciaran went through the rigorous interview process at the ‘Theatre of Dreams’ Old Trafford before going on to pass the practical element of the interview at United’s training ground at Carrington Road.

“One of the first things I was asked at the interview was ‘are you a Man United fan?’ and I didn’t know what would happen when I told them I supported Liverpool but it showed how much I wanted the job and worked out in the end. One of the senior coaches in the Soccer Schools was a Manchester City fan so I wasn’t alone,” laughed Ciaran.

Successful applicants can work at the club’s coaching programmes throughout Ireland and the UK, and as far away as Canada, Australia, Singapore, or Abu Dhabi. Coaches also take part in a special two day coaching clinic before they undertake their jobs.

“I led coaching camps in the Republic (of Ireland). It is just amazing to see that kids from all over the world come to be coached by a Man United soccer school. It is something I really enjoyed and has helped me in my career,” said Ciaran.

“I would like to go in to teaching and the soccer school course combined with the Sports Management Masters has really helped me in that way because it will add to my strengths and abilities as a Physical Education teacher.”