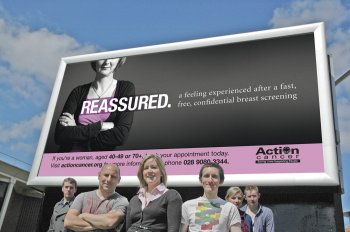 Communication and design students from the University of Ulster are behind a new breast screening awareness campaign which was launched this month.

The eye-catching advertisements can be seen in national and local newspapers, posters in pubs and restaurants and on billboards across Northern Ireland.

Dougie King, Head of Fundraising and Communications at Action Cancer, said: “The adverts have incredible impact and communicate our key messages clearly and effectively. It has been a pleasure working with PANI and Navigator Blue, but the greatest credit has to go the students - the winning work speaks for itself.”

Dr Aodheen O’Donnell, Course Director of the BSc in Communication, Advertising and Marketing at Ulster, said: “This is only the second year this initiative has taken place but the mentors, judges and tutors have already seen the standard of work dramatically increase. For the winning students to have their creative ideas actually used by Action Cancer is enormously rewarding and exciting for everyone involved.”

The Publicity Association of Northern Ireland (PANI) and University of Ulster Student Workshop Competition allows students from the School of Communication and the School of Art and Design to develop an advertising campaign under the guidance of a local advertising agency.

One of the winning students, Jonathan Fleck, who is studying Design for Visual Communications, said: “This is the first time the PANI competition has delivered work that will feature on posters and in the papers, and it will be fantastic to see our work go live. We are delighted that it is being used to promote Action Cancer and support their free breast screening service.”

Terry Corr, Creative Director at Navigator Blue, described the vision and clarity of thought from the students as “outstanding”.

He said: “They should be very proud of the work, the campaign does everything a good ad should – it captures the attention and delivers a very clear message. Any advertising agency would be pleased with this work and we are certainly very proud that we helped the students deliver to such a high standard.”

Since winning the competition, which was judged by an independent industry panel, the students have continued to work with Action Cancer and Navigator Blue to produce a photo shoot and design layouts for advertisements.