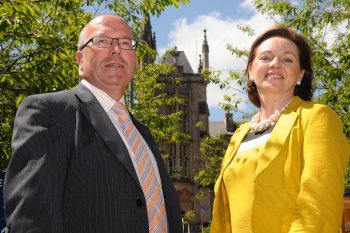 Leading chartered accountant Gerry Murray, who has been appointed a Visiting Professor at the University of Ulster,, and Professor Dolores O’Reilly, Head of the Department of International Business, which is based at the Magee campus

Gerry Murray, one of Northern Ireland’s leading chartered accountants, has been appointed a Visiting Professor at the University of Ulster.

Professor Murray, who is from Londonderry, is a Fellow of the Institute of Chartered Accountants in Ireland and a member of the Fraud Advisory Panel. His expertise includes forensic accounting, a rapid growth specialist field that is important across the world in crime-fighting and upholding regulations governing corporate and private financial activity.

His appointment coincides with an expansion in professional and business services education at the Magee campus, where he will be attached to the Department of International Business which is part of the Ulster Business School.

Professor Dolores O’Reilly, Head of Department, said: “Professor Murray has been an invaluable friend and mentor to the Department for many years. His acceptance of this role adds immeasurably to the international standing of both the Department and Ulster Business School.

“Gerry brings a wealth of practical experience and has exciting new ideas about course development that will be of immense benefit to students and staff.”

Professor Murray said: “I am very honoured by the appointment. Provision of professional and business services education is essential to the growth of a flourishing financial services sector, and I hope to contribute to the continued expansion of that provision at Magee.

“I am particularly keen to play a role in developing the new BSc Honours Accounting and Managerial Finance. Its launch heralds a new era in professional recognition for accountancy education at the campus. Programmes like this strengthen the region’s financial services base and bolster the North West’s drive for economic regeneration.”

Professor Murray is a partner in the Derry firm of chartered accountants, McDaid, McCullough, Moore, which he joined as an articled clerk in 1976 after graduating from Trinity College Dublin in History and Political Science.  It is one of the biggest cross-border accountancy practices in the North West.

He holds an MSc from Sheffield-Hallam University and is an Honorary Fellow of the Centre for Investigative and Police Sciences at City University London. He has lectured in Political Economy at Magee, is a former Business Editor of The Derry Journal and contributes frequently to print and broadcast media as an economic and political analyst.

Professor Marie McHugh, Dean of the Ulster Business School, commented: “Professor Murray is a champion of enhanced links between the accountancy profession and Magee. In that spirit, he has played a crucial role in achieving what we all have been striving towards – the launch of the new course in accounting and managerial finance.  It is a landmark in the Ulster Business School’s expansion of course provision at Magee.”