University of Ulster students starred for the medal winning team at Thursday’s final day of competition, which is taking place in Edinburgh.

The women’s hockey team won the tournament in style, beating their Welsh counterparts 9-0. Earlier this week they secured an impressive 4-1 win over the English Universities and a 4-0 drubbing of Scotland.

Armagh’s Scarlett Holdsworth scored a brace, as Emma Stewart, also with Armagh, and Pegasus player Kate McConnell, got the other goals.

Over 100 students from Northern Ireland travelled to the Scottish capital this week to compete in netball, football, hockey, basketball and rugby, with over half the students from the University of Ulster.

Dr Nigel Dobson, Co-Director of the Ulster Sports Academy, said: “The girl’s achievement is absolutely superb. To achieve what they have in no small feat and it follows on from the success that women’s hockey has brought to the University this year. Our investment in sport and the international scholars has proven successful not only for the University but also for sport in Northern Ireland.

“The University of Ulster is striving in its vision to become the leading university for sport on the island of Ireland and with our students competing at the top level, such as the BUCS Home Nations, we are taking great strides in achieving our aims.”

Just last month the Ulster Elks have won the O’NE 1918 Ulster Shield, which added to their all-Ireland intervarsity success when they won the Chilean Cup. 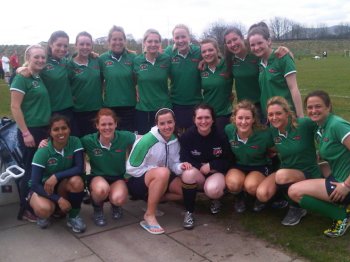