Magee Staff Top Of The Class 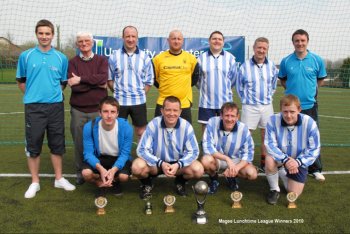 A soccer team from the University of Ulster – made up entirely of Ulster staff – has won a prestigious league competition.

The staff members at the Magee campus went unbeaten for the whole season and fought off competition from 15 other teams in a lunchtime league organised by the Soccer Development Unit.

The seven-a-side league was made up of squads from local businesses in Derry city, as well as some student teams.

Soccer Development Assistant, Paul Quigley, said: “The competition has been a huge success, not just for the footballers at Magee who won the tournament but also for the people of Derry.

“To see businesses and community groups from across the city throwing their weight behind a pioneering soccer programme at Magee is great to see. Each week we had every side out competing and I would like to thank them for their commitment and dedication to show up each week and play the 22-game season.”

The Magee team was made up of staff from ICT services, the Office of Innovation and School of Computing.

Squads from organisations such as the Civil Service, Inland Revenue, Derry Taxis, Thornhill Taxis and Fujitsu, all competed and mid-way through the season, the league was spilt into a Premier Division and First Division. Magee staff won the Premier section and North Star took the first division title.

Former Northern Ireland International, Manchester City and Sunderland player, and Derry native, John ‘Jobby’ Crossan was on hand to present the winners with their trophies.