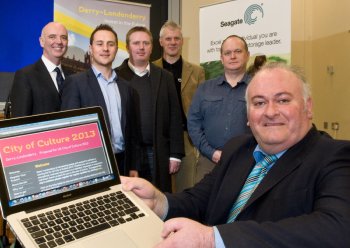 Digital Creativity – where the creative arts and digital technologies come together – was the focus of a workshop at the Magee campus of the University of Ulster this week.

Digital creativity is a major growth area and the workshop was an opportunity to showcase some of the cutting edge research being undertaken across Ulster’s Jordanstown, Coleraine and Magee campuses.

`The Imagineering Quarter: Desperately Seeking Digital Creativity' was hosted by the Magee campus with sponsorship from Derry City Council and Seagate Technology.

Keynote speaker and special guest, Professor Geraint Wiggins of the Intelligent Sound and Music Systems (ISMS) group in the Department of Computing at Goldsmiths' College, University of London gave an enlightening talk on 'Understanding Computational Creativity'.

Following the workshop, Professor Mc Kevitt of the Computer Science Research Institute at Magee said: “There are already very strong links between London and Derry/Londonderry as discussed in this city's bid for UK City of Culture 2013 and creative technologies can be used to strengthen those links."

"Geraint is better qualified than most to speak about digital creativity.  He has obtained two doctorates – one in Artificial Intelligence and the other in Musical Composition, both from Edinburgh University. He has served on UK Technology Foresight Creative Digital Media Task Groups and from 2000 to 2003 was chair of the SSAISB, the UK learned society for AI/Cognitive Science. We’re delighted to welcome him to Magee to share his expertise with us.”

Academics from the Magee, Coleraine and Jordanstown campuses also gave presentations on their ongoing research and industrial collaboration in the area of digital creativity covering a wide range of topics including mobile creativity, animation, spoken dialogue technology, computer games for rehabilitation and imagineering digital creativity.

Professor Mc Kevitt said: “This workshop provided an excellent opportunity for the University of Ulster to showcase its work in leading edge software technologies and to engage with other institutions, industry and government bodies to augment and facilitate collaboration in the area of digital creativity and creative technologies.”

A key element of the programme was the official launch of Derry City Council’s Digital Content Strategy document developed by Mark Nagurski of Own Brand Media Ltd. and Colin Stutt, Colin Stutt Consulting.

Professor Mc Kevitt said: “This Derry Digital Content Strategy has been informed by many staff and departments of the University of Ulster and other institutions and stakeholders attending this Digital Creativity workshop -- this official launch of the strategy has received overwhelming support and directly contributes to this City's bid for UK City of Culture 2013."