Helping to explain the information you may have received from an eye care professional in a straightforward way.

Helping to explain the information you may have received from an eye care professional in a straightforward way.

These webpages have been designed to explain the information you may have received from an eye care professional in a straightforward way.

We also have developed some practical advice and guidance for you as parents, teachers, and other people involved in your child’s daily life.  This may be especially useful if your child has a vision problem. The following information has developed from research and clinical experience in eye care.

Visual information, especially when a child has reduced vision, should be:

Visual acuity is probably the most fundamental measure about someone’s vision. But what do the numbers mean? Our 'What print or image size can my child see?' webpage describes how visual acuity is measured, what levels of vision look like and also has printable examples of letters and pictures.

When your Child has Low Vision: Practical Factsheets for Close Work

The following are one-page factsheets containing practical recommendations for close work for three levels of visual acuities. They are general guidelines, but hopefully give useful advice to help understand visual needs. Please click on the appropriate visual acuity level below.

Visual acuity is the term used to describe the smallest detail a person can see when looking straight at a stationary, high contrast (e.g. black on white) target in good lighting.

Things that matter about visual acuity;

For someone with ‘good’ or average visual acuity, such as 0.0logMAR or 6/6 Snellen, smaller objects will be easily seen, such as conventional print and pictures in a book.

For someone with reduced vision, making the object bigger or getting closer will help. e.g. for 6/24 vision (0.6logMAR) make the object 4x bigger or bring it 4x closer

Contrast means how bright and dark different aspects of the object are. Black on white is maximum contrast.

Things that matter about contrast:

Ensuring things are sharply copied and that the object is composed of sufficient thickness of detail is important.

These images are made available with permission from Kay Pictures Ltd and may only be used as described on this website. For further information on visual acuity tests visit www.kaypictures.co.uk.

What can I do to help?
Think about what you are asking your child to look at. Is it bold with solid lines and high contrast? Or is it dull with shades of grey?
A useful way to think about this is a poor photocopy of a sheet compared with the bright colourful original.

Here are some specific tips:

Here are some key points about crowding:

Things that matter about crowding:

Avoiding clutter and keeping desks clear and tidy helps to direct attention to the object of interest more easily.

These images are made available with permission from Kay Pictures Ltd and may only be used as described on this website. For further information on visual acuity tests visit www.kaypictures.com.

Visual field is the peripheral vision we are aware of and use to move and see objects appearing that we can direct our central (best) vision towards.

Things that matter for visual fields:

If we have brain damage we can have problems with our visual fields. This can be to the right or left sides, or below or above our central vision. 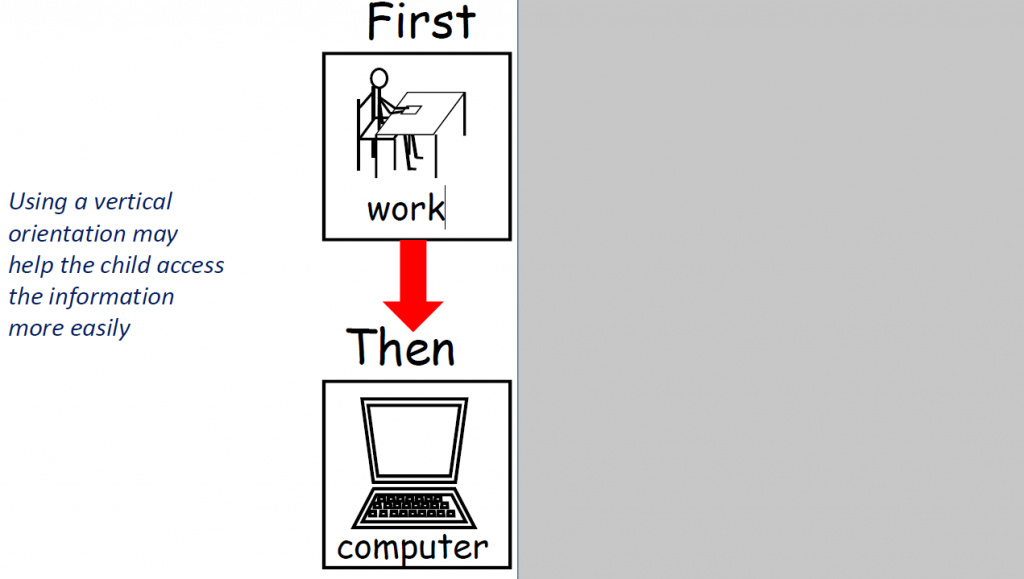 Encouraging your child to wear glasses

A common problem among parents is that their children may be reluctant to wear their glasses when they are first prescribed.

This can be for a number of reasons and often results in frustration for both the child and the parent.

Please have a look at this leaflet which contains some helpful advice to encourage your child to wear glasses.

Accommodation
This is the focusing ability of the eye. The eye has a crystalline lens which can increase/decrease in power to ensure accurate focus for objects at different distances.

The eye has internal eye muscles (ciliary muscles) which make the crytsalline lens change shape. This process is called ocular accommodation and can only happen if the ciliary muscles are functioning normally and if the crystalline lens is intact and flexible.

If the crystalline lens has been removed, is not positioned correctly, is rigid, or if the muscles are not functioning optimally, the eye may not be able to change focus to accommodate.

Even when the crystalline lens and muscles are essentially normal, it can be difficult for some children to focus accurately or cannot sustain accurate accommodation.

If the child also has an uncorrected hyperopic refractive error, this compounds the problem.

Cerebral Visual Impairment - CVI
The term CVI can be confusing. Traditionally, CVI stood for Cortical Visual impairment. This means that while the eyes may look healthy there is damage to the visual pathway which results in visual impairment.

In CVI, the ocular structures (i.e. the eye, and the optic nerve head) appear normal, but the damage lies in the pathway which normally sends the information collected by the eye to the visual cortex.

More recently, the term CVI has been used to stand for Cerebral visual impairment. This is a term which means that there is damage to the brain (but not necessarily the primary visual cortex) affecting how it processes the visual environment. There are two main streams of visual processing: dorsal and ventral streams. The dorsal stream (sometimes called the ’Where’ stream) is responsible for interpreting movement in a visual scene and how the individual should respond or move to an object. It is also responsible for choosing which elements of the visual scene to pay attention to and therefore dysfunction in the dorsal stream causes difficulty in understanding complex visual information (see Crowding).

The ventral stream (sometimes called the ’What’ stream) is responsible for recognition of objects within a scene. Deficits in visual processing can be more subtle than visual acuity loss, as an individual may have a good level of visual acuity, but lack the ability to process and interpret the visual scene appropriately.

Visual skills inventories are available to help professionals identify and describe CVI. This has led to the development of strategies to help manage this for individual patients.

Refractive Error
Light entering the eye is bent, or “refracted”, as it passes through the cornea and the crystalline lens. The term “refractive error” is used to describe how accurately this light is focused on the retina to form a clear image.

An eye that perfectly refracts the light coming from a distant object, to make a crisp focused image of it on the retina, does not have a refractive error and is referred to as an “emmetropic” eye by eye care professionals.

Eye care professionals measure refractive error by shining a light into the eye and observing how the light is reflected back. Lenses held in front of the eye allow the examiner to measure whether the eye has any refractive error (need for glasses). Eye drops are often instilled prior to this measurement in order to ensure that an accurate result is obtained. These drops reveal the full extent of any refractive error present and increase the size of the pupil.

Hyperopia (long-sight or far-sightedness): In a long-sighted (far-sighted) or hyperopic eye, the light is not bent sufficiently to focus on the retina, but would focus behind the eye (if this were possible), making the retinal image blurred.

The eye can try to overcome hyperopia by changing the shape of the lens inside the eye to make it stronger but this means the eye is not relaxed and accommodation can be difficult to sustain so people with hyperopia will have more comfortable vision when they wear spectacle lenses to correct their hyperopia.

Myopia (short-sight): A myopic or short-sighted (near-sighted) eye has a blurred retinal image when viewing objects in the distance. It is not possible for the eye itself to sharpen the image, and spectacle lenses are needed to bring a distant image into focus on the retina.

However, a myopic eye is naturally focused for objects close to it, which is why it is called ’short-sightedness’. The more myopic the eye, the closer the object will need to be to be seen clearly without spectacles.

So short-sighted people without spectacles have to get up close to objects to see them clearly.

Astigmatism: A hyperopic or myopic eye can also be astigmatic. This type of refractive error focuses light from different visual planes or meridians at different points, and results in distorted vision at both distance and near.

Strabismus / Squint
This occurs when one eye does not look in the same direction of gaze as the other eye. A squint can mean the eye appears to look inwards, outwards, upwards or downwards compared to the other eye. Sometimes squints are not noticed all the time, or are corrected when someone wears their glasses.

When both eyes are open, the vision from the squinting eye is usually ignored by the brain.

Nystagmus
Nystagmus is a term used for when the eyes appear to ’wobble’ and make small, rapid, back-and-forth rapid movements.

Individuals with nystagmus can often adopt a head posture where the nystagmus occurs least. This is called the null point.

Nystagmus can appear more pronounced (worse) at certain times, for example if a child is tired, unwell or concentrating