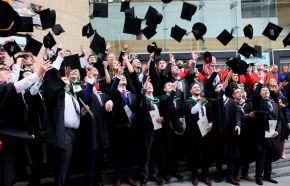 Influential leaders in their field are being recognised by Ulster University during summer graduations.

Ulster University will recognise the outstanding contributions of prominent educators, scientists, leaders, sports people and humanitarians both locally and globally by conferring honorary degrees on 11 individuals during upcoming graduation ceremonies.

HBO Senior Vice President Jay Roewe and Ireland’s most successful Team Captain in sporting history hockey player Katie Mullan, will join those working across the areas of education, science, and music who will be honoured for making an exceptional contribution to their field.

Community activist Eamon Baker, Suren Gupta and Michael Hutton are all being recognised for their civic contributions along with Martha Pope who is being honoured for the time and expertise she has given to peacebuilding in Northern Ireland.

Dame Susan Jocelyn Bell Burnell who has been credited with one of the most important scientific achievements of the 20th Century, is to be honoured for her contribution to science.

For services to education Alan Logan is being recognised along with John Hunter for his distinguished services to Ulster University as Pro-Chancellor and Chairman of Council.

Tony Macaulay is being honoured for his work as an author, peacebuilder, leadership consultant and suicide prevention advocate while Richard Parkes is being recognised for his contribution to music through his work with pipe bands both nationally and internationally.

“Ulster University has a long tradition of awarding Honorary degrees to individuals who have distinguished themselves in their chosen field – people who, through creativity, talent and determination have made a meaningful contribution to society.

“We are proud to honour these individuals whose outstanding contributions to society represent the spirit and values of our University and who can only inspire our students as they begin to shape their own future paths and direction.”