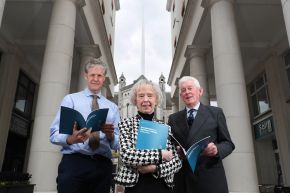 Fresh proposals for civic society and Government in Northern Ireland to work together in a concerted effort to eradicate sectarianism have been outlined in a report today.

The review by Ulster University, commissioned by the Sir George Quigley Fund which was set up by Ulster Bank, contains over 50 proposals on how sectors ranging from Government, business, trade unions, education, the community and voluntary sector, religious insittutions, youth services, policing and justice, arts and sport can work collectively over a sustained period of time to foster greater collaboration and understanding across communities.

The report will be discussed at a conference at Ulster University’s Belfast campus today which will be addressed by former Stormont talks chairman Senator George Mitchell and a range of civic leaders.

The recommendations were compiled after extensive consultation with a range of sectors by Professor Duncan Morrow on behalf of a committee administering the Sir George Quigley Fund - a fund created by Ulster Bank to promote social wellbeing in honour of its former chairman who also had a distinguished career as a senior civil servant and thought leader before he passed away in 2013.

The review calls for a collective and comprehensive action plan that could include:

The recommendations also include proposals to build further on the role and impact of sport and the arts, to include festivals of diversity and participation in alternative and non-traditional sports across communities.

The conference, which will bring leaders from the various sectors together, will propose effective co-ordination of all anti-sectarian programmes for maximum, sustained impact.

With fresh talks underway to tackle the current political impasse and restore the power sharing Executive, the chair of the 1998 talks process that led to the Good Friday Agreement, Senator George Mitchell said ahead of his keynote conference address: “

A cross section of society will attend the conference including politicians, churches, business, community leaders, youth organisations, sport, justice, and young people from across Northern Ireland.

“The deeply tragic events of recent weeks sharpen the focus on just how dangerously close we remain to this residual threat. The young people taking part reflect the hope and optimism that we all hold for Northern Ireland, but we have a duty of care and leadership to ensure that the expectation, aspiration and potential of the next and future generations is met and not stifled by sectarian polarisation. We hope that the Review’s recommendations will make possible the step change needed.”

“We acknowledge the extremely positive contribution made over the years by many individuals and organisations to address sectarianism, often working silently and unrecognised. Regrettably sectarianism still lingers at the heart of our society and acts as a barrier to prosperity and as an insult to a civilised community This scourge of several generations will persist unless resolute and sustained action is taken to address  it. Everyone has a role to play in addressing this problem – it is not the sole responsibility of government or for the political parties in Northern Ireland. Civic society needs to work with them to ensure it is placed at the top of the public agenda alongside the economy as a key priority. We trust that our conference will help to establish the foundations for a credible solution driven by collegiate and concerted civic leadership and action.”

Read the report in full here.