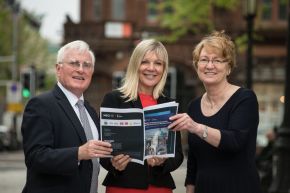 Belfast’s office market is one of the UK’s best performing when it comes to returns for investors, significantly outstripping cities such as Manchester, Liverpool, Glasgow, Cardiff and London, a new property report has found.

Launched today (May 1st) at an event in Ulster University’s Belfast Campus, the review found that whilst the local commercial property investment market overall saw a marked slowdown across 2018 due to Brexit uncertainty and the ongoing transition within the retail sector. At the All Property level the Northern Ireland commercial property produced a Total Return of 1.7 percent, the report found, compared with Wales 0.2 percent, Scotland 3.6 percent and 4 percent in the case of England (excluding London).

However, the office sector in Northern Ireland continued to outperform, delivering another year of double-digit returns for investors in 2018. Looking at Belfast’s office market specifically reveals an even more positive story, where returns were 12.4 percent. This was well above the UK average of just over six percent and the European average of eight percent.

“MSCI, local commercial property advisers, in collaboration with Ulster University and RICS has produced an objective evidence-based global benchmark, against which the performance of the Northern Ireland commercial real estate market is measured. The welcomed growth in the office market reflects the new investment dynamic in the city region. The modern breed of IT and professional services occupiers are highlighting Belfast as a progressive, go-to and contemporary location offering investment opportunities comparable with and exceeding other European locations.”

“This is the only independent analysis of the Northern Ireland commercial property sector that benchmarks it against other regions and cities, so it is an extremely valuable report that will be of significant use to surveyors, investors, and others in the property sector.”

The event to launch the review heard from speakers including Professor Alastair Adair, RICS member and Deputy Vice Chancellor of Ulster University, as well as from Amanda Newton, Vice President of MSCI Real Estate, and Suzanne Wylie, Chief Executive of Belfast City Council.