Sami (left) is pictured showcasing his artwork to Ulster University Vice-Chancellor, Professor Paddy Nixon, (right) and Princess Anne during her official opening of Phase One of the University’s Belfast campus development. 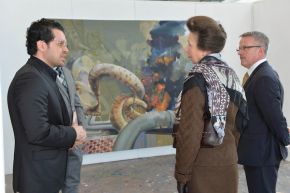 Sami (left) is pictured showcasing his artwork to Ulster University Vice-Chancellor, Professor Paddy Nixon, (right) and Princess Anne during her official opening of Phase One of the University’s Belfast campus development.

A talented Ulster University graduate has received global recognition for his outstanding artwork at the 2016 Undergraduate Awards. The Awards are the world’s largest recognising undergraduate excellence across the sciences, humanities, business and creative arts.

Mohammed Sami Al Amili (Sami), who graduated in June 2016 with a degree in fine art from Ulster University, has been announced as Global Winner of the Visual Art and Design category with his submission ‘Paintings’. Born in Iraq, Sami created a collection of acrylic artworks for his university that was inspired by his experience of Iraq’s turbulent history.

Sami beat stiff international competition in the year that saw the prestigious awards receive a record number of submissions totalling 5,514 papers from undergraduates in 244 institutions and 121 nationalities. Two other Ulster University students were highly commended including Cathal McDaid in the English literature category and Laura Hetherington in the business category.

Speaking about his success, Sami said: “I am immensely proud to have my work recognised on an international stage by The Undergraduate Awards, which is acknowledged as the ‘Junior Nobel Prize’. This achievement is a culmination of all my hard work and commitment to pursue my dream despite challenging circumstances.

“In 2005 I studied at the Institute of Fine Arts in Baghdad but had to leave university due to the war. I moved to Sweden and some years later emigrated to Belfast. I used to walk past the University hoping that one day I could continue with my studies. Over the next three years I worked extremely hard to enhance my English, eventually securing a place on the fine arts degree course.

“During my time at Ulster University I was lucky enough to be among the first students to study in the new art studios. The bright, modern building is a truly inspiring environment that has contributed to the success of my collection.”

CEO of The Undergraduate Awards, Louise Hodgson, added: “This is a huge achievement for Ulster University and its students. The Undergraduate Awards received the highest number of submissions to date with only the best papers making it through the judging process, the competition was extremely tough and the judges were astounded at the high quality of undergraduate research in the programme this year. Congratulations to this year’s successful entrants.”

The Ulster University graduates have been invited to meet their fellow awardees at the annual Undergraduate Awards Global Summit taking place in Dublin in November.