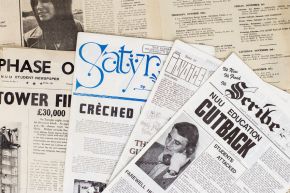 Professor Dennis Farrington is President of the Board and Professor in Law Faculty, South East European University, Macedonia.  He is also Visiting Fellow at the University of Oxford.

I joined NUU's Chemistry Department in 1970 when my then PhD supervisor Dr John G Jones transferred on promotion from the University of Kent. I made the journey from Canterbury to Coleraine carrying all our research equipment in my A35 van. We were located in a building which no longer appears on the campus plan. Then in 1971 or 72 we relocated to the new buildings. I have many memories of that, but one sticking in my mind was the fire which took hold in the tower, and having to evacuate the nearby chemistry labs by shouting, as the alarms did not work (leading to an enquiry). For a while I was an active member of the C14 club, the principal activities of which involved trips to various breweries in NI and in RoI.

Another big memory is of a workers' strike during which people armed with clubs and torches descended on the campus demanding the University close. At the time I was acting President of the Students' Union (as the President was in hospital with a rugby injury) and I recall how the then Vice-Chancellor agonised over whether to close, or uphold academic freedom and defy the mob. In the end, we had to be pragmatic. Most unfortunately some staff were physically abused as they left.

As Students' Union Secretary I had to transport ballot boxes to/from Magee when we had SU elections. I recall having to explain to some heavily armed soldiers why the big black tins (borrowed from the local council) were not bombs, and shouldn't be opened.  We persuaded the young Lieutenant that they were harmless by shaking them. I also have fond memories of the train from Portrush where I lived, Decimal Day, getting a blue driving licence, the trolley service, and seemingly endless spag bol in the canteen!

Living in NI during difficult times gave me a new outlook on the importance of democracy and human rights. I worked in NIO from 1973-78. Since 1994 I've been a consultant to the Council of Europe and other international agencies, working in other countries with difficulties of their own. I've been travelling to Kosovo, for example, for 18 years.

I graduated PhD in absentia in January 1973 having joined the civil service in London in September 1972, working on the accession of the UK to the EEC.

It is impossible to overstress how much the NUU contributed to my future career and understanding of society. It is an honour to wear its robes at our degree ceremonies.