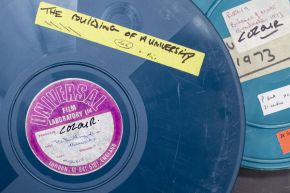 Dr Les Gornall was a student at Coleraine from 1978-81 and again in 1990.  He completed a BSc and a DPhil in Environmental Science.

After some years of study and a couple of OU courses to keep my mind alive during 'the Troubles’, I decided to go back to University.

A weekend chance meeting in Ballymena brought me into contact with Nick Sanders who had started an environmental science course at Coleraine (He now speaks fluent Danish and is a Danish-English translator).

Nick organised an interview for me at the department of Physics with Rob Murray.   Rob was busy but greeted me and asked what I wanted. Five minutes into the conversation his secretary brought in the mail and on the top was a misdirected application form for QUB, he glanced at it - it was mine.  You can join this year if you wish!   Thus I started my first year doing a modular course, six modules in Environmental Physics.   In the first term I did the Environmental field course plus four modules in Physics. I had anticipated doing just two modules in the second term but changed to Environmental Science when I realised I needed more biology and soil science modules for my biogas goals to be met. There were four environmental modules in the second semester.  Thus it transpired that I did eight modules and a field trip in the first year.  I had no grant, paying for the course out of all my cash reserves and a bank overdraft.

I managed to obtain a grant for years two and three and left with a first class honours.

The company I set up the day after my last exam was called Energy and Data, a partnership with Houshang Jamshidi, the electrical engineer who designed the radios and radio manufacturing lines for Grundig in Belfast.  In less than a year I paid my debts and had a flat in Chorley, one in Newtownards and a weekly commuting lifestyle training people to use ‘micro computers’.  This was before Windows and we used state of the art CP/M operating systems. That was the data and financially lucrative side of the business, the energy part was designing anaerobic digesters.   We found a site, applied for a grant, LEDU investigated, took it to the Department of Agriculture and the project was soundly rejected.   This was going to take work and the basics were unknown by government. Once the cow slurry had been used in the digester, did it still maintain its grassland fertiliser properties?  Yes - I had proved that with my dissertation - but no one else had done the work, there was a credibility gap.

I decided to go back to university to read for a doctorate, maybe someone would believe me then.

The photo is the only working biogas plant in Ireland at the time. 200 litres of poultry manure and cattle slurry, a bunsen burner and inner tube gas store - no fire risk here hey?!

A year into the AD based DPhil, a messenger from Our Lady of Bethlehem Abbey in Portglenone contacted me.  ‘Could I convert beef cattle manure, grass and hay, and poultry manure into electricity?’ Yes I said, and in a week I was talking to the whole monastery and almost immediately given the money to build the first full size digester and in-vessel composter in Ireland.   With the help of some pioneers in the UK James Murcott, Michael Chesshire and Russel Mulliner we built the digester and I had to invent the in-vessel composter from scratch.  Soon, Dungstead, to be used instead of dung was being sold as a fertiliser in bags. The crops improved, the land improved and the wood boiler that burned an oak tree every month was mothballed. It won the largest environmental award in the UK in 1986 and came second against 1,500 national projects in Brussels for the European Year of the Environment in 1987.

I formed a new company Green Land systems and we nearly achieved the first biogas powered university at Coleraine but internal committees declined the offer.  I designed 70 biogas plants on cow manure, pig manure, silage and liquid food wastes but by the time we had four in the ground BSE (Mad Cow Disease) struck NI and the industry died on a Thursday afternoon with one announcement.

There were digesters to build in England and I was soon called to assist with the fall-out from the Urban Wastewater Directive banning the dumping of sewage sludge to sea. We could digest it and did so in equipment that I designed up to 200,000 tonnes per year in a single plant.   This was very successful and led to many others being built.  It was full on now building an industry in the UK.

It took off later in the UK than in Germany where 10,000 digesters were built on slurry-maize models and a big government subsidy.

But a slow start also meant that the UK was able to get a better research base and AD centres set up in several universities.  550 biogas plants have been built in the UK and these have a combined output greater than a small nuclear power station.   We could provide over half of the domestic natural gas from local sources of food waste and some energy crops in the UK.  Combined with fuel saving insulation and heat recovery, this means that for the next 500,000 years we can be self-sufficient in domestic energy.  And yes, the passive solar house my wife and I designed in 1994 proved that half a meter of insulation and heat recovery can make the necessary savings of energy even in the sub-arctic tundra that is Magherafelt.

As I reach retirement age I look back with fondness at the MacFadibold Parties, at the time I almost blew up the soils laboratory (we cleaned it well!) and with a certain amount of satisfaction that the original vision of converting organic carbon waste to useful energy, hot water and the best organic fertiliser, has become a reality and the world is a better place because of it.