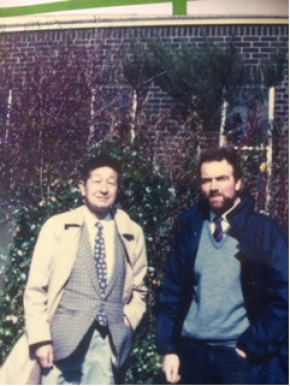 The University was a major part of Brett’s working and personal life for over 27 years.

Brett started as a gardener in 1981, by 1988 he was appointed to grounds supervisor, and finally left Ulster University’s Coleraine campus in April 2007 as the estates officer.

Brett was the first non academic-related member of staff to be granted an unpaid, year-long leave of absence in 1987/88 to attend Greenmount college to carry out a formal qualification in horticulture.

“I took great pride in rewarding the faith to invest in me and returned as top horticultural student.”

Brett has many fond memories of life at Coleraine. He shared a story about meeting an eminent Japanese horticulturalist, Masayuki Hashimoto who travelled to Coleraine to visit the Guy L Wilson garden in 1994 to learn about Irish daffodil history.  Hashimoto described it as a 'rare and significant horticultural collection'.

Amongst all these great stories, we asked Brett three key questions:

What is your most enduring/standout memory of life at the Coleraine campus?

“If not too cheesy, genuinely the pleasure the grounds, gardens and sports fields gave to staff, students and visitors.”

Along with this pride, Brett was also given the responsibility of designing and implementing the Millennium Arboretum project.

“We involved staff and the local community from all walks of life.”

However the most standout of all Brett explained, was the visit of the Queen in 2007.

“I was fortunate to be introduced and had the privilege of coming up with the idea of the gift presented.  The Queen was presented with 24 daffodil bulbs – a variety called ‘Castle of May’ – from the Guy L Wilson Garden."

What was the best thing about working at the campus?

“The opportunity to practice my horticultural profession.”

Brett explained that he worked on sports fields, greenhouses, arboriculture, gardening and interior floral displays. Although for Brett, working at Coleraine itself was very rewarding, he explained:

“Few other employment opportunities gave this variation, resources and support.”

“I was also encouraged to participate in student life, especially sport. It gave me an understanding of what being a student is about and the problems they can face. Overall, it was the people that made working life enjoyable – one of the other best things was the people I met, learned from and became friends with.”

What are your hopes for the campus as we look to the future?

“My views of course are horticultural, but I also have a sporting connection within the University through rugby. Listening to them, I would love to see the students being put first at every opportunity and promoted to be allowed to think for themselves and be decision makers and given time to do so."

Brett also hopes that some more work can be put into the grounds of the University – particularly the Millennium Arboretum and the restoration of the national collection of narcissus in the Guy L Wilson Garden.

"Both offer great gateways to linking with the wider community and promote the University."

"I nearly got shot by the Secretary of State's bodyguard whilst holding a display of daffodils.  I also recall a last minute rush to change blue flowers in a bed, to red, with just an hour to spare before Tony Blair's visit with his pledges!"