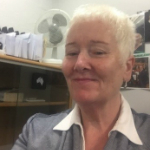 Mrs Liz McKeown has been working in a clerical role within the School of the Built Environment at Ulster University since 2007 having previously worked in various other departments throughout the University since 1998. Leaving school at the age of 15 without formal qualifications, she returned to education in 1995 and graduated in 1998 with a BSc Hons Degree in Combined Studies. As an avid ‘lifelong learner’ Liz continued on with her academic career to undertake a Master’s Degree in Professional and Management Development in 2002 and a Master’s degree in Marketing in 2012 whilst working fulltime and assisting her husband in his role as a Minister within the Presbyterian Church in Ireland.

For a 5-year period Liz was the Education Administrator for Marie Curie Cancer Care in Belfast. She is kept busy with her 3 grown up children and 8 grandchildren and still takes time to indulge in her hobbies of power walking and watching movies.